Karnataka Examination Authority has published the important dates of Karnataka CET 2015-common entrance examination conducts every year for admissions of freshers in the Engineering courses at UG level in Karnataka. 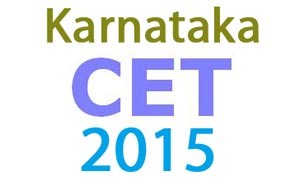 All candidates should who meet the eligibility criteria of KCET 2015 before giving a direct take on Karnataka Common Entrance Test 2015. KCET was conducted on May 12 and May 13, 2015.

Candidates can check the details of KCET 2015 Application Procedure, Eligibility Criteria, Exam Pattern, Important Dates, etc. below on this page. KCET was held on May 12 and May 13, 2015.

Given below are some details about Karnataka CET 2015:

About KCET: The Common Entrance Test is conducted by Karnataka Examinations Authority every year for the admission of candidates to various Engineering courses.